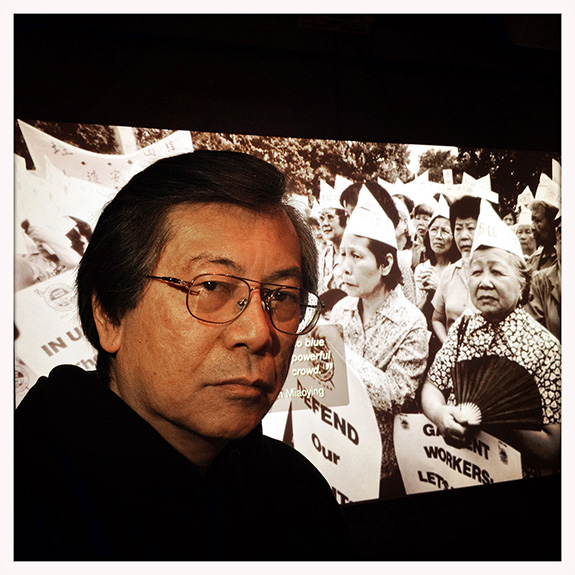 
Corky Lee poses with his 1982 photograph of striking garment workers, featured in the New York Historical Society’s exhibition Chinese American: Exclusion/Inclusion. “It was the largest Chinese garment worker rally in the history of NYC. 15,000 showed up to lobby for a new contract – it was pretty monumental. Fifteen, twenty years after that, the garment industry is no longer a viable employment source for the Chinese immigrant community, but back in the day, at least one person in the family had to work for the union, because that was the source of health insurance. Because there was absolutely no health insurance in the laundries and restaurants.”

Corky was still in high school when he began noticing the absence of Chinese Americans in the media and newspapers around him – even the historic photograph of the completion of the transcontinental railroad, built by Chinese labor, didn’t have any Chinese workers in it. He has been committed to making his community visible ever since, photographing not only Chinatown but Asian America for more than four decades. The 68 y.o. Queens native has been the country’s self-appointed, undisputed, Unofficial Asian American Photographer Laureate for so long that even the post office agrees: a letter addressed to just this title in “Elmhurst, Queens” actually found its way to the photographer.