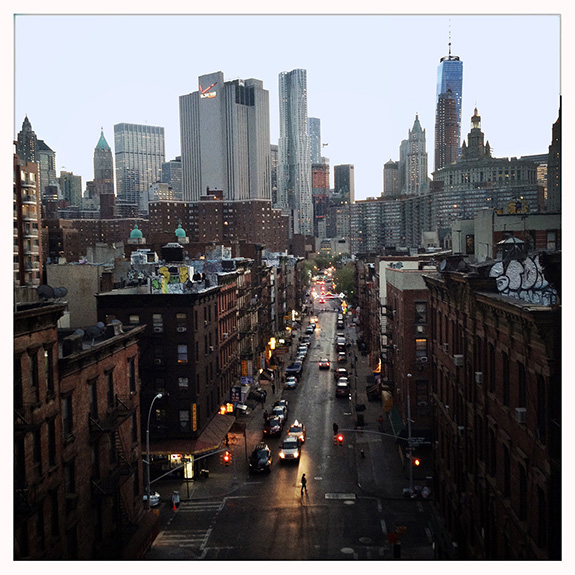 View down Madison Street towards downtown


Nighttime view along Madison Street. Initially anchored around three blocks in downtown Manhattan, Chinatown expanded for years into parts of Little Italy and the Two Bridges/Lower East Side neighborhood. More recently, that trend has begun to reverse. Brian Tom, of the Chinatown Community Young Lions club: “I see Chinatown changing significantly now. It'll change even more in ten years. We probably won't recognize it – it'll be a row of restaurants, and made-over tenement buildings to look like condos and co-ops. You're not gonna have a lot of Chinese people living in Chinatown, because the Chinese people are not able to afford it, not the old-timers, for sure.”

“It's a buyer's market. So you have these tenement owners that are saying, ‘you know what, if I patch a few holes in the walls, I paint over the apartment, instead of getting 400, 500, 800 dollars a month, now I can get 1,600, 2,200.’ It's the almighty dollar that wins at the end of the day. They're pushing out the old people, they're pushing out the people that have lived in Chinatown for years, they are pushing out people that have had apartments for generations, raised generations of children. You'll have that second, third generation, maybe, who wanna stay there. At those prices, you could live anywhere you want to live. I think kids coming up in the area now have a difficult enough time of identifying with their heritage, with their culture, and it'll get to a point where, I think there will always be a Chinese New Year's celebration, but it'll be worn down significantly.”